Android vs. iOS – The Battle Has Seeped Into Mobile Ad Fraud

In the tech world, there is hardly any battle louder than ‘Android vs. iOS’. The two operating systems make for almost the entire smartphone users across the globe. Interestingly, it’s not just their respective developers who are adamant at proving their platform better, but even their users (or one can call fanboys) are more fanatic about it.

They compare iOS and Android on the basis of different factors, such as security, user interface, ease of use, compatibility with apps, and several others. Another factor which is rarely discussed but affects almost every user is the system’s vulnerability against mobile ad fraud.

Mobile ad fraud in the industry for long had been an ignored topic. However, marketers have started to realize that they are losing billions of advertising budget with mobile among the most vulnerable mediums[1]. Therefore, mobile ad fraud is taken as a serious challenge and advertisers are looking for ways to mitigate.

Mobile ad frauds are of various types that leverage the device and OS operations. As iOS and Android operate on the different models, ad frauds inflicted on them are also different.

There is a conventional belief that iOS offers a safer environment than Android. The major reason is cited to the open-source availability of Android for the device manufacturer, whereas iOS adopts a ‘walled garden’ approach which hardly gives any customization option for third-parties. Regardless of the general belief, fraudsters in the mobile advertising look for the opportunity to prey upon the both – however not equally.

Android Leads in the Unwanted Race:

In a research conducted over 140 million app installs[2], Android devices attracted 5.8% app install frauds on an average. With iOS, the average app install fraud for iOS devices was 3%. Android being a dominant operating system in the global market with almost 75.6% of smartphones, means that the ad fraud figures are way too alarming.

Ad Fraud in Android vs. iOS: Why is Android Vulnerable?

Android is available as free and open software for manufacturers and in return, the device manufacturer needs to add basic google apps and default search engine on the device. Being open-source software means it can be meddled with – to add more customization possibilities for the manufacturer. However, the availability of the source enables the fraudsters to look for vulnerability and make use of it to find a way to manipulate clicks or attributions.

Compatibility with third-party apps, give fraudsters a range of opportunities. There are various mobile ad frauds that rely on the installation of malicious app on the device of the user. Once installed, the app has various permissions in the device to stake the claim for an app install, generate click to execute in-app events, and more.

Let’s take an example of click injection mobile ad fraud, which utilizes the malicious app to commit fraud. Users may install a utility app like custom wallpaper, flashlight effects, etc.,  from unverified app stores, unaware that the app may be malicious. This app will gain permission to inject a click to run another application and to listen to the ‘install broadcast’, a signal released by apps on Android devices to confirm installation or uninstallation status.

On listening to an install broadcast of your app, it injects one click to the Mobile Measurement Partner (MMP) to claim app install source and another click to run the app on the device. In the last click attribution model, the malicious app is able to earn the credit of getting the app installed and hence, the advertiser will pay the wrong source.

Similarly, there are various other types of frauds in which an app installed can utilize its permissions to inflict the frauds. Therefore, the users are recommended to install the verified applications only from the reliable app stores, such as Google Play Store.

Android runs on thousands of device models, which means the development and compatibility challenges with Android devices is high. Any challenge such as zero-day vulnerability in Android will need more time to be fixed, allowing more time to fraudsters. Since iOS runs with a handful of devices, the fix can be provided comparatively faster.

Ad Fraud in Android vs. iOS: Is iOS Safe Against Mobile Ad Fraud?

No. Arguably, it may be less vulnerable than Android but it is not impossible to breach.

Generally, Customer Lifetime Value (LTV) of an iOS user is higher than an Android user as they spend more on in-app purchases. So, fraudsters see iOS as a more lucrative target. According to AdExchanger[3], iOS devices are 1.5 times more likely to be attacked by fraudulent ad traffic as compared to Android devices.

iOS has a guarded system for the apps that restricts users from installing unverified apps unless the user chooses to jailbreak the device. Given that the apps available on Apple’s App Store have to go through a series of stringent tests, the chances of ad frauds to be committed by any malicious app is almost impossible.

However, some fraudsters are able to utilize the ‘walled garden’ of iOS as well. iOS-based devices are susceptible to LAT fraud. LAT, which stands for Limit Ad Tracking, is an option for users to opt-out from sharing Device ID with the advertisers. Fraudsters manipulate the attribution data by mentioning LAT users in the app-installation report to make their efforts look better, and hence raising the bills for advertisers.

Regardless of the device being Android or iOS, some frauds do not depend on the device functionalities. Some ad frauds like click spamming rely on flooding the ads with bot-based clicks on the browsers, which makes all operating systems more or less equally vulnerable. 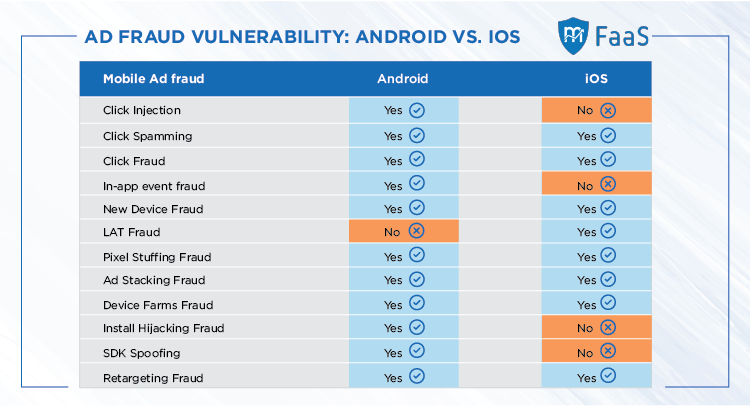 No matters if your app advertising campaign is running for Android or iOS or both, it is a tough world for advertisers. Android for its large user base has a larger number of fraud instances as well. However, the gap in-app installation fraud percentage for the platforms is not as wide with 5.8% for Android and 3% for iOS.

As an advertiser, you may be running app install campaigns across channels and platforms including iOS and Android. Different platforms mean you need to deal with different types of fraud. To prevent mobile ad frauds, you need a solution that goes beyond manual data analysis to filter and blacklist the fraud sources. A more reliable solution is choosing a dedicated fraud detection and mitigation tool.

Ad fraud prevention tools are capable of running numerous algorithms to detect and take or recommend the requisite actions against any fraudulent activity in real-time. Not only it saves your manual efforts but also improves the ROI as your marketing advertising budget is spent in the right sources.

[2] Mobile Ad Fraud: Twice as High On Android As iOS

[3] Is There More Ad Fraud On iOS Or Android? The Thieves Don’t Care

* ALL TRADEMARKS DISPLAYED ON AFFLE’S WEBSITE ARE THE TRADEMARKS OF THEIR RESPECTIVE OWNERS, AND CONSTITUTE NEITHER AN ENDORSEMENT NOR A RECOMMENDATION OF THOSE ORGANIZATIONS.

Nishant Kadian takes care of content marketing for mFaaS. He is passionate about sharing his learning on the ad technologies, mobile ad fraud preventions, and more. Drop him a 'Hello' on LinkedIn or Twitter to start a conversation with him.

Click Spamming – Mobile Ad Fraud: Everything a Marketer Should Know